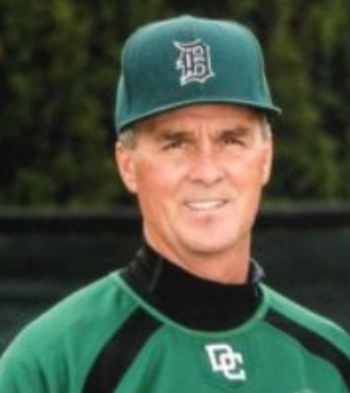 Coach Saunders spent 33 years as a teacher and Head Coach of the Dublin Coffman High School Baseball Program in Dublin, Ohio. In those years Tim was with USA Baseball from 1995-2015 as Head Coach of the 16’s and Assistant Coach with the 18’s. He was part of the first USA team to beat Cuba twice in a three-game series.

Tim was USA Baseball Amateur Coach of the Year in 2000, and inducted into the Ohio High School Baseball Coaches Association Hall of Fame in 2004. In 2012 Tim became the first Ohio coach to be inducted into the National High School Baseball Coaches Hall of Fame.  He has a career record is 589-392 while leading the Dublin Coffman Shamrocks to 13 League Titles and a State Championship in 2001.

Tim was previously President of the National High School Baseball Coaches Association (NHSBCA) and is now currently an Executive Director with the NHSBCA.