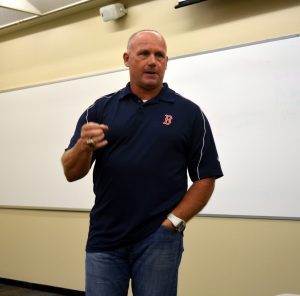 Rick has an impressive resume in baseball, which includes Canadian National Team Manager, Jr and Sr National Team Hitting Coach, playing on the Canadian National Team for the 1988 Seoul Olympics, the 1987 and 1991 Pan American Games, and the 1985 and 1991 Intercontinental Cup. He has coached in 17 countries worldwide including coaching the Croatian National Team.  Rick has also served as a scout for the New York Yankees and Tampa Bay Devil Rays, and as a technical consultant on the movies  “Fever Pitch,” “Angels in the Infield,” and “Batter Up.”   Among the many pupils of his programs are one of only six Canadians ever drafted in the first round of the MLB draft, as well as over 200 other professionals, draftees and players on college scholarship.  Rick was inducted into the Peterborough and District Sports Hall of Fame in 2008.